I’m a big fan of foraging and when I saw a podcast on the “Sustainable World Radio” series entitled, “The Wild Wisdom of Weeds with Katrina Blair” I got pretty excited!  I learned SO much from this podcast!

One of the most intriguing wild edible featured was Thistle.  This spring I pulled a few wheelbarrows full of this prickly invasive out of my lawn.  It spreads SO fast and is SO painful to step on.  I absolutely don’t regret removing it but I do regret not juicing it!

The kids and I decided to sample some thistle juice for ourselves yesterday.  Finding the plants around the periphery of the yard was pretty easy. Even my 22 month old was pointing them out!

Thoroughly soaking the greens seemed like a good idea to removed dirt and whatever else might still be lurking.   Washing them was especially fun as lots of little creatures came to the top and I removed slugs and bugs and put them into bowls for the kids to watch. 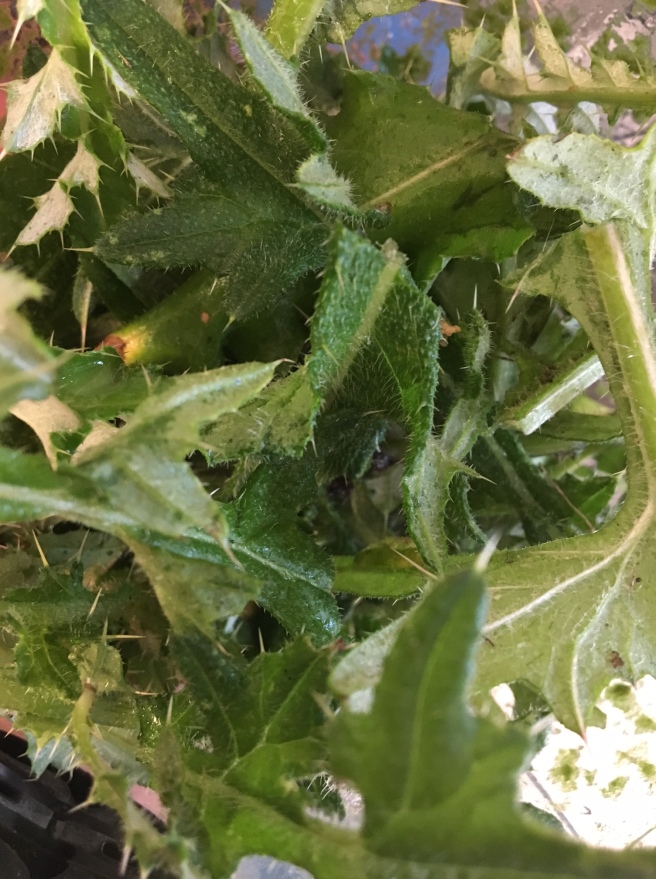 We don’t have a juicer so we put them into the blender with a little orange juice.  After blending I strained them twice to remove any remaining spikes. Once thought a metal strainer and then a second time through cloth. The juice that remained was surprisingly tasty.  We made a second batch with just water added and all agreed that the orange juice was an important addition.

My kids loved it and it was really fun to experience this plant in a new way!  Apparently thistle is great for detoxifying and has lots of healthy benefits.  The process was a little labor intensive so I don’t think this will be a regular thing but it was a fun experiment for sure!

Here’s a video by someone who knows MUCH more about this stuff than I do!

Every year I am STRUCK by all of the magic that surrounds me as the earth begins to wake up. Yeah, I know there are scientific explanations for all of it, but birth and rebirth of anything is about as close to magic as I have seen.

I push little seeds into the wet earth and part of me just doesn’t believe it’s possible for such a tiny speck to become a plant.  But then it does.  A little sprout pops up and it grows and grows.  It brings forth new life.  AMAZING!!! It’s like what I always say about the human birth experience… it’s crazy how the most EXTRAORDINARY thing can also be so incredibly ORDINARY!  Like, how is this happening EVERY day?  EVERY second even! (Don’t get me started…)

Getting to share the magic of spring with my kids makes it that much more special too.  I know it’s such a cliche but seeing the world through their eyes is priceless.  Also, getting a chance to retell the story of what is and what might be to them helps to renew my own belief in what is possible.

The other day I was hanging out in the yard with my sweet 4 year old Ada when a Swallowtail butterfly landed right in front of us.  We both knelt down to get a closer look.  Ada asked if she could pick it up and I encouraged her to very gently.

The butterfly let her hold it in her hands.  The joy on my little girl’s face was perfect.  Luckily I had my phone in my pocket… What was I saying about detaching from my phone?

Anyway, the butterfly then flew off and jumped around on the ground for a few minutes.  I was pretty sure it was injured.  I suggested to Ada that we say a little “prayer” to Mother Earth (because I’m like that) to see if we could help the little guy.

I kid you not.  Only seconds after we wished for it to find health and happiness the butterfly flew off.  And not just a little bit… it flew to the top of the tree line and disappeared into the sky!  Now THAT’S magic!!! 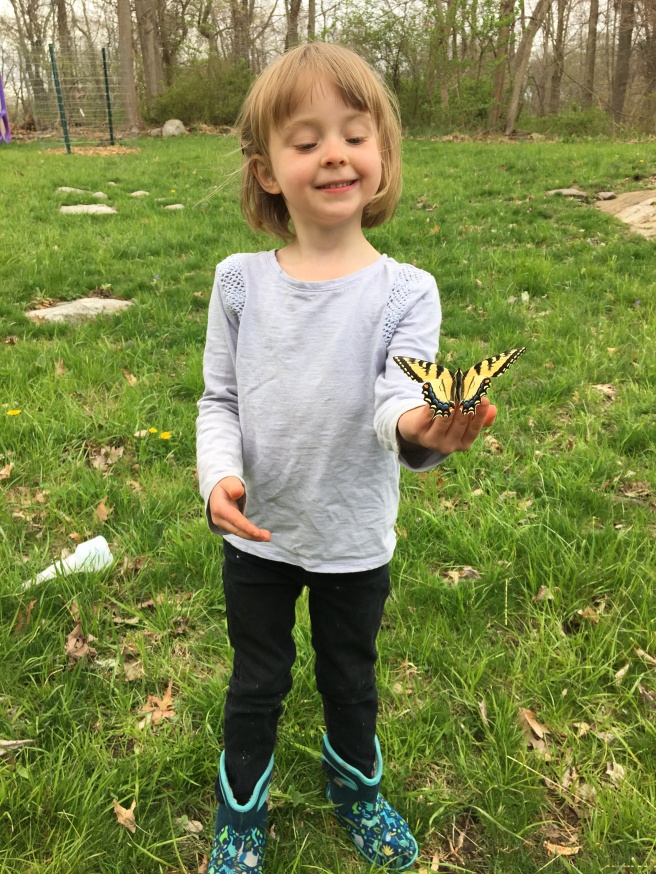 How have you been experiencing the magic of Spring?

One of my favorite ways to use essential oils is to diffuse them before bed.  There is something SO delicious about drifting off to sleep in a room filled with the cool clean feeling of diffused oils.  Breathing in high quality essential oils is not only great for overall health but can really help to put our minds and body at ease to support a healthy night’s sleep.

There are lots of essential oils that can help promote sleep but the blend I’ve been into the most lately is this:

I only use and recommend Young Living essential oils and you can read more about why here.  Diffusing this blend before bed and while we fall asleep has been an amazing thing for us.  If the kids are too hyper and it’s time to settle down I’ll rub some on their feet too, which they love.

Which oils are your favorites for bedtime? 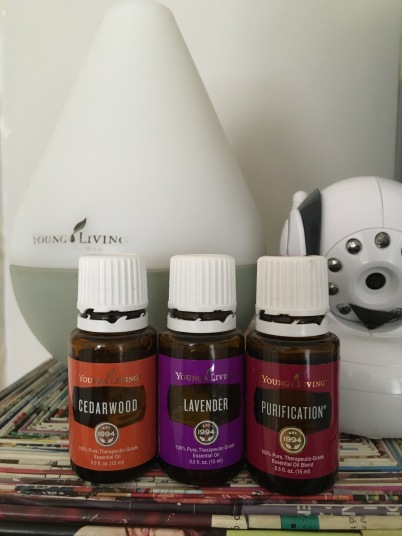 “Mama, I love nature.  I love nature more than anyone else loves nature!” said my four year old daughter as I was putting her to bed tonight.  Obviously my heart melted.  And it gave me the feeling like I’m doing something right!

Today we went for what is becoming a weekly walk with friends through the forest.  We dress the kids up for wet and muddy play.  That usually means Bog boots, waterproof rain pants and jackets.  Then we just let them free.  They climb, they run, they jump.  They WALK in streams and mud.  They draw lines in the mud with sticks then use those same sticks to stir in the stream.

Today they surprised me by climbing up a huge rock outcropping.  I watched as my little girl scanned the area for the best path up then carefully climbed with her hands and feet to the top.  At one point I couldn’t help myself and so I shouted up, “do you feel safe?” To which she answered, “yes!”

These are the moments I dreamed of before becoming a mother. Giving my kids the space to explore their own limits and the world around them.  It just doesn’t get much better!

The topic of night weaning often comes up on various mama groups I’m in and I just can’t help myself from responding. It’s a topic that weighed pretty heavily on my mind during my daughter’s second year. Some nights there was nothing sweeter than waking up just a little bit when my daughter would rouse, pulling her close and then both of us falling back asleep while she nursed. Other nights I dreaded having to pull myself out of my slumber, even a little bit. Especially on the nights when she would wake every few hours.

What works for our family is bed sharing. It’s not what I planned on before having kids but like so many parenting decisions, it was what worked. Also, I have come to find that I love it! There is nothing sweeter than cuddling in with my littles. Especially at the end of a particularly difficult day. It’s impossible to feel anything but the deepest love when you look at that little angelic face as magical dreams pass through her head. It’s the cutest!

My cycle returned when my daughter was about 20 months old. With it came very sensitive nipples during ovulation.  At that point I decided that allowing her to nurse to sleep was no longer working for me.  The first step I took was to discuss with her how tonight we would be nursing for a bit then she would fall asleep cuddling, rather than nursing. It went surprisingly well!  She was fine with it.  I did a ten second countdown (other people sing a song) to let her know when we were almost done.  She would pop off before I got to one.

The first night of this she happily cuddled in and fell asleep.  I was struck with how sweet it was to watch her face drift to sleep.  There were other nights when she got upset with this arrangement, but I held her close, rocked her when she needed it, and she was able to eventually relax.  If she got really upset I would offer ten seconds of nursing, and it seemed to take the edge off and help her to reorganize herself.

We did this for a while. Maybe a few weeks, or a month?  I can’t really remember.  But at a certain point I decided I was ready to take the plunge and night wean her completely.  I bought the book, “Nursies When the Sun Shines” by Katherine C. Havener.  My daughter was very into books and I really think this helped her understand what was happening.  We also talked about it too.  I was careful to not talk about it too much, or too far in advance.  I think I really only brought it up the day before?

So then, I picked a night when we would start and crossed my fingers!  The amazing thing was that it went MUCH more smoothly than I had imagined it would!  She woke up ONCE the first night and cried in my arms on and off for about a half hour.  Then she slept the longest stretch she had since she was a newborn!  Over the next few days we had similar results. I think the longest stretch of waking was about 45 minutes?  By the fourth night she slept through the night, cuddled next to me. It was blissful for all involved!

The most important lesson I learned from this process was how adaptable little people really are.  You hear “people” talk about setting up habits and getting babies “used to” doing certain things.  But I just don’t really buy into that.  I say, if it’s working, let it work.  If things aren’t working anymore, try something different!  Our kids will likely adapt and be fine with it.  This process was definitely harder for me than for her!

And now… as my son is nearing 18 months I’m starting to think it might be time to night wean him… This time around I’m not as scared that it will be hard.  I’m more just a little sad to think about the end to our lovely middle of the night cuddling and nursing.  But then I remember how good sleep feels… and how nice it is to to cuddle WITHOUT nursing… I don’t know… to be continued I guess!